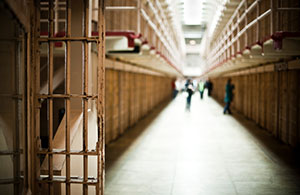 Among all nations, the United States has topped the list of the most-dense prison populations. According to Geography.com, there are 196 countries in the world. The Federal Bureau of Prisons data consulted on January 1, 2015, indicated 210,781 inmates are incarcerated among federal-level prisons. Given that federal prisoners account for approximately 10percent of the nation's entire prison population, the remaining 90 percent are held in state prisons and county jails. The U.S. Department of Justice (Bureau of Justice Statistics) tabulated almost 2.3 million inmates are housed among all the prisons and jails in America.

In December 2014, the Center on Budget and Policy Priorities, a nonprofit and nonpartisan policy entity, declared, "Most states’ prison populations are at historic highs after decades of extraordinary growth." U.S. Department of Justice statisticians established that 1 in 35 adults were incarcerated at years-end, 2013. Juvenile-age inmates were not included among the numbers.

In its website statement, The Sentencing Project boasts America's penal institutions lock up people at "...a rate of incarceration far higher than that of any other industrialized nation, and [is] unprecedented in U.S. history." The Sentencing Project data indicate 2.2 million inmates occupy prisons in America.

No matter the variations in figures, even the lowest estimations among all contributive sources exceed the number-two nation on the list: China is rated with a prison population of 1,701,000, according to the International Centre for Prison Studies. Further putting this into context, China surpasses the United States with an enormously larger populace. The US Census Bureau tabulates a current population of 320,136,000 compared to China's 1,390,510,630 people, per WorldPopulationStatistics.com.

The data shows that the United States has the distinction of having the most prisoners in the world which, in essence, means job stability and career growth in the Correctional Officer profession. And, despite the variables, the issue is concrete. The lifeblood in penal institutions: Correctional Officers. Budgets, populations, and prison reforms will always defer to the uniformed men and women who embody those who oversee, control, and maintain order in our nation's jails.

During a United States Senate Committee on the Judiciary hearing in November 2013, budget discussions parlayed costs of incarcerating federal prisoners. As to federally-budgeted dollars, tossed around was an increase in federal prisoners which, in turn, brewed the impetus of an increased budget proposal. Increased prisoner intake translates to increased cost to incarcerate and operate prisons, including an elevation in staffing levels to balance the officer:prisoner ratio.

Specifically denoted by the Judiciary Committee hearing was a bump up in the Federal Bureau of Prisons budget to afford more Corrections personnel. In a nutshell, the costs to properly handle and adequately operate the federal prison system will require an estimated 30 percent of the Department of Justice budget leading up to 2020. Government officials in Washington, D.C., are assessing the monetary allocations pertaining to its prison facility operations and staffing. A visit to the Department of Justice Bureau of Prisons employment page would prove beneficial to candidates seeking a career in Corrections.

Mind you, the federal allocations referred to excludes state and county governments, which finance, operate, and staff their own detention facilities. This equates to additional opportunities in the Corrections arena at the state and local level. The umbrella under which potential correctional officer candidates stand is brimming with growth across all areas. The emphasis is on tending to the world's largest aggregate of prisoners.

Integral to the astronomical U.S. prison population is its mainstay: Prison staff.

You will discover that no matter the variations in salary, education requirements, and background assessments, job opportunities in Corrections are constantly available. It becomes a central component in prisons pertaining to fluency of facility staff and operational continuity. Moreover, it becomes a defining challenge for the nation's jail facilities to keep pace with its mission, notwithstanding the notoriety of a vast prison overflow.

One may wonder how the prisoner population ballooned. Drug offenses had a lot to do with penal institutions bursting at the seams with burgeoning arrests. Less-lenient sentencing commenced with the crack-cocaine epidemic. The prison population swelled with individuals convicted what may be considered "minor offenses" such as meager amounts of contraband. Probation stipulations were implemented; however, many remain behind bars per widely-recognized and endemic sentencing guidelines. With the heavier focus on judicially-rendered sentences leaning towards probation, the lot was diminished with only a dent in a prison system population, because of the constant stream of newly-adjudicated inmates. No matter, the cycle prevails, enumerated by statistics.

Stability for COs, according to federal prisoner measures, is solidified by the aforementioned Bureau of Labor Statistics projections. Stemming from the trajectories of U.S. prison incarcerations, job availability for trained corrections officers will not dissipate anytime soon.

Certainly not to capitalize on such sobering statistics, but to adhere to prison population protocols and civil rights mandates, adequately staffing prisons with correctional officers remains paramount. Ultimately, safety of all who work in detention facilities and those who endure respective periods of incarceration are core factors equating to a stabilized penal institution.

U.S. Attorney General, Eric Holder, planned prison reform with specific intent to alleviate federal prison populations. Regardless of federal efforts to reduce prisoner roles, the criminal justice system is a bulwark without threat of being even remotely diminished. People will break the law. Police officers will apprehend. Courts will mete out justice. Prisons will secure doors behind those who demonstrated an unwillingness to abide by laws of the land, and who are convicted for their deeds. An endemic cycle of prisoner flow will constantly evolve.  That said, the statistical blemish placed by America's exorbitant incarceration rates as compared to other nations must be digested with a sense of realism.

The Bureau of Labor Statistics data indicate a 10-year growth projection in correctional officer positions between 2012-2022. The BLS projections indicate 142,400 more corrections jobs are anticipated during the decade-long period.

To put these numbers into context, the following enumerations demonstrate the growth potential: In 2012, BLS data listed a total of 452,800 correctional officers employed at penal institutions across the United States. The data projections incorporated federal, state and county levels' sworn staff. By the projected decade-long maturation period concluding in 2022, approximately 474, 900 corrections officer jobs will be filled to adequately staff all detention facilities.

At the commencement of the ten-year projection period, BLS data illustrated a median annual salary of $39,040 for correctional officers. Compensation varies among the states and depends upon government  budgets. For example, a detention deputy starting a Corrections career with the Hillsborough County Sheriff's Office in Tampa, FL., stands to make $44,335.20 after successfully completing the Corrections Academy. (A pay rate of $17.23/hour is paid to recruits while attending the academy; books and supplies are also provided).

Vast job opportunities for Correctional Officer candidates was also recently announced by the California Department of Corrections and Rehabilitation (CDCR), seeking to fill 7,000 vacancies by 2016 at an annual salary of $45,288. (after graduation from the academy). CDCR's spokesperson, Lt. Ray Baez, told a CBS anchor that the hiring blitz stems largely from retirements. CDCR reports approximately 1,800 COs retire each year, underscoring a chronic recruitment need.

CAREER OPPORUTNITIES BASED ON RETIREMENT FIGURES

Notwithstanding the ingredients which culminated in the United States' overflowing prison roles, the statistical revelations must be heeded. Inasmuch as holding the #1 spot regarding aggregate of inmates in prison, the function of the American criminal justice system (penal system in particular) must become central along with staffing allocations to handle such a robust population.

Perhaps the greatest triumph lays not only in acknowledging a tremendous prison population, but how such a factor is dealt with. Although some of the reported excessive prison roles may be alleviated by discharge, the majority can not. By sheer virtue of their crimes, many must be relegated to fulfill lengthy terms, as sentenced by the Courts. Uniformed correctional officer professionals serve as the well-oiled gears enabling the operational machinations of a burgeoned prison census.

There are no bragging rights from being at the top of such a dubious list, but there is vast reality in knowing maintenance is indispensable to the overall mission. This is where you come into play...as a Correctional Officer candidate. The time to fulfill a challenging career is now!

The Truth About Starting Salaries in Corrections