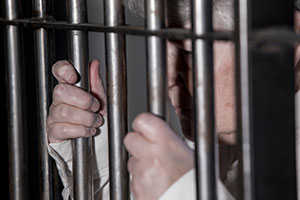 Like everyone else, incarcerated individuals experience the same effect of human existence: aging. But, life and aging inside a penal institution can be far different than life on the outside. That is what a New York City-based criminal justice think-tank emphasized when it conducted a study on the effects of prison life and aging.

The research study recently published by The Marshall Project concentrated on our aging, ailing prison population, and the impacts it has on penal systems. The study, entitled, "When Prisons Need to be More Like Nursing Homes," examines the realm of healthcare delivery behind bars. An implicit factor is the eventual demise of an inmate stemming from health woes, as daily, jailers bear witness to the process of aging and death.

As it relates to the sworn gatekeepers at our penal institutions, the purpose of this article is to examine the interrelations of ailing/aging inmates and the correctional officers who oversee them. Despite the chronic peril to the lives of correctional officers, at the very core of prison life is human co-existence, in a confined space. By virtue of this circumstance, bonds form; it is inevitable among our species. In fact, it is a basic human need (Maslow's hierarchy of needs). That said, a prison population and its officials co-exist as a unique subculture, spending inordinate amounts of time together, bearing witness to the aging process, including sickness and the eventuality of death.

"The Green Mile," a film set in 1930s-era at a Louisiana State Penitentiary, depicts the interactions among prison guards and prisoners on a death-row cell block. Actor Tom Hanks, who plays prison guard/supervisor Paul Edgecomb, exhibits well the concept of dignity among men. A recurring mantra in the film is "Dead Man Walking," an omen emphasizing the lives of men facing the absoluteness of a death sentence. Despite their indiscretions and depraved indifference which delivered them to state custody, Hanks exemplifies the basis of knowing each inmate and caring for his charges in an official capacity. Conversely, most inmates in the movie extended the same virtuous courtesy. A proverbial win-win. But, respect is earned, not readily granted. Similarly, the 1947-era prison venue depicted in the movie, "The Shawshank Redemption," exhibits the interplay between inmates/prison guards: some adversarial, others symbiotic.

These two movies serve to illustrate the dynamics between inmates and correctional officers, primarily focusing on mutual respect, and sometimes, admiration for human character traits. Invariably, correctional officers (CO’s) experience a full spectrum of emotions. From an inmate's disdain for correctional staff, to sadness stemming from a model inmate's deteriorating health, often resulting in death, stems a proverbial roller-coaster of significant thoughts and emotions.  There is a reason Newsweek published a story entitled, Prison Officers Need Help, but They Won't Ask for It (May 2014). Suicidal tendencies in prison cuts both ways: inmates and prison officials alike.

DEALING WITH THE DIMENIONS OF HUMAN EXISTENCE

So, how does a correctional officer deal with these dimensions of human existence, especially when encountered in a typically tense setting? Is the potential for "burn out" diminished by forging equitable relations? Does your penal institution forbid such amicable bonds? Or is it encouraged? Is the notion even realistic?

Occupational psychologists, also referred to as organizational or industrial psychologists, study workplace environments, behaviors, and attitudes of humans. Their findings ultimately suggest creating an institution that is more viable in terms of employee welfare, training, management, etc. A prison setting is a hotbed of human dynamics. Quite often, it is adversarial. But, it does not necessarily have to be. Although we may not be in a position to change certain conditions or circumstances, we can always change our attitudes about any situation. This is the core objective of occupational psychology. Correctional professionals can glean much from sound organizational tenets.

Stemming from attitude adjustments (professional, courteous, objectively, and fairly-applied resolutions), the environmental relationship between inmate and CO does not have to be (too) strained.  Realistically, however, this may not be so easy to achieve. Stress, the silent killer, is always afoot within prison venues. If not recognized and dealt with, corrections staff may engender physical or mental breakdown, or both.

In view of the chronic flux of emotions endured by correctional officers, are penal institutions focused on the welfare of its staff? Given the inherent stress of being a CO, is workplace counseling offered? If so, are COs taking advantage of such an outlet? Or is the traditional stereotype (denying a problem exists to save face) still alive and well?

Not only can psychologists decipher the negative impacts of prison life on a corrections officer, but he/she can also dissect (with reasonable certainty) how workplace stress will be carried home to loved ones. As a CO, you are being asked to handle life and death in a strenuous arena, while remaining unharmed by those who generally seek to inflict harm upon you, all while keeping order among people being kept against their will.  That’s no easy task. Unfortunately, the home environment may feel the brunt of bottled-up emotions.

No matter how strong and how well-trained a correctional official is, the human psyche' is alive. But, does it thrive? To varying degrees, peace officers confront inexplicable situations. How each officer deals with these scenarios varies. Many discuss topics amongst themselves. Not a bad practice, but bias may override objective advice in this manner. This is when a professional comes in to the picture.

In March 2014, commissioner of the NYC Department of Corrections, Joseph Ponte, intimated, "We need to end the culture of excessive solitary confinement and unnecessary force, and bring a new mentality of respect and safety to our wardens, officers, and inmates alike." Ponte, a 40-year corrections veteran, hit the nail right on the head when he said the prison system needs to "ensure that staff are not only well-trained but also mentally and emotionally prepared to do a difficult job.”  BINGO!

Tantamount is how one chooses to deal with life behind bars. By this, I mean corrections staff, and how they handle the static nature of violence, human decay, aging and ailments, and the evolution of respect based on status...while adhering to a mountain of rules/regulations. Vastly different in scope but similar in results, doctors and corrections officials have one thing in common: front-seat observations of lives dwindling from physical and mental hardship. However, mentally and physiologically speaking, prisoners have the added deterioration hastened by the nature of incarceration.

From a CO's standpoint, it's not about culling favor. In a penal setting, that should never be the case. It is about forging bonds laden with mutual respect, having clear understanding of the constructs of a penal institution, and debunking the dis-compassionate correctional officer stereotypes. To put it in a more transparent context: As a CO, how would you prefer an incarcerated loved-one be treated while they are serving time? With mutual respect, dignity, attentiveness, and understanding? With compassion from fair-minded corrections professionals? As seen in "The Green Mile" and "The Shawshank Redemption," these dynamics and interactions are possible, notwithstanding the circa.

Just as in-service training modules are designed to retain and/or sharpen perishable duty-related skills, so should the well-being of every law enforcement officer be considered. Whether patrolling the streets or walking the cell blocks in a prison setting, peace officer stress is ever-evolving, sometimes even resulting in self-inflicted harm. We must look out for ourselves as diligently as we look after our brothers/sisters in uniform. This also segues to the very purpose of corrections officers: maintain order of in-custody groups, to include suicide prevention.

Likewise, self-destruction among inmates is neither new nor waning. The decision of an inmate to take his/her own life speaks volumes about how they are struggling to deal with prison life. Who is to say COs are not impacted by these actions? Who is to say COs are not instrumental in saving inmates from self-destruction, perhaps based on a mutually-respected bond?  The complexity of self-preservation (COs) while witnessing self-destruction (inmates) is inexplicable. Yet, it is commonplace...and the emotional toll is taxing indeed.

I recall every image, scent, texture, sound, and nuance of my very first suicide call. He succeeded, right in front of his wife and children. That experience may fade (challenging sheer willpower), but it will always be a part of me. The balancing act is never smooth. As stated earlier, it takes an enormous amount of attitude adjustment, ASAP.

Are these same traits expected from the inmates among whom you work? The picture is clear. Adversity does not have to exist between humans. Middle ground is always an option. As a correctional professional, self-preservation can be acquired while simultaneously fulfilling your career responsibilities.

This may be accomplished by fostering relations so that inmates in your purvey feel the value of being human, and not just a number. Dividends will likely be returned. Whether on the inside or on the outside, there is vast wisdom to be gleaned from the aged. Those who make mistakes -- leading to conviction and incarceration -- likely have the most robust sagas to tell. Only a listening ear will be on the receiving end of human nature in its vast array of intrigue.

Training the gatekeepers to handle a prison population and its inherently unique circumstances is paramount. Aged inmates likely come with certain ailments which may not align with prison protocols. A universal example is laying prone when ordered to do so, anywhere an inmate might be, when a situation arises. Older bodies may be challenged (both physically and mentally) to move quickly enough, and according to correctional officer expectations. Inmate inability can be misconstrued as non-compliance. Thus, comprehensive training becomes crucial to properly deal with infirm members of a prison population.

Acutely trained COs can more-readily recognize the hardships of aged, sickly inmates, and therefore adhere to institutional protocols while understanding the burdens of human nature, regardless of how one got there. Where correctional officers are concerned, maintaining a well-placed attitude can go a long way towards achieving mutual respect and thus a safe environment for all inmates and the COs who are responsible for community, however closed-off it may be.

A good attitude, a balanced demeanor, and sound character traits aid in fulfilling the prison mission...and can make a difference in the co-existence between inmates and corrections officers. After all, your official capacity is aptly named peace officer for a reason; keeping the peace is the name of the game and the objective you must practice.

The Benefits of a Criminal Justice Degree