Candid Advice About Your Attitude, Outlook and Career 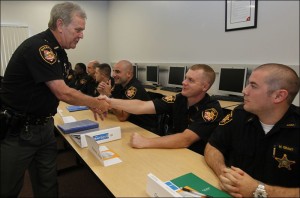 As a first-year cadet,  you are undoubtedly experiencing what may be deemed surreal experiences in your new criminal justice system role. Anything from providing first aid to an injured person or a simple escort...to witnessing the lifeless body of a human being who lost all hope. Whether it be seeing someone with self-inflicted gunshot wounds or an inmate hanging in a jail cell, these horrific hard-fact incidents can jar the human psyche. One imperative support mechanism to survive and enable carrying on with duty fulfillment is attitude.

As humans, we are all equipped with attitude. It is how we utilize and steer our attitudes which either make or break us. As a peace officer, do you somehow digest (as best possible) the latest horrific scene, or will you allow it to gnaw at you from within? Make no mistake, you are not Superman or Wonderwoman! No one expects you to be robotic and insensitive to such tragedies encountered on the job. Humans are designed with emotive abilities. That said, one of the responsibilities you accept as a peace officer is to channel your thoughts into a funnel and strain away the debris, so that you can complete your required duty. The question is, how do you deal with the emotions you are feeling once the job is complete? Do you compartmentalize those feelings or do you allow those thoughts to drive you into a downward spiral?

Like an undertow, your thoughts and feelings are a powerful current that can drag you in, pull you under, and consequently extinguish your breath. You can become, in effect, prey. Another casualty. Like your academy training dictated over and over again: "Arrive safely and do the job!"

With that point made, a proper mindset (attitude) is strikingly like our body's water consumption requirement: It is a must to survive and to succeed in overall health. Attitude is defined by Dictionary.com as "manner, disposition, feeling, position." Notice it reflects the words "disposition" and "position"? The variations, in and of themselves, imply a choice is to be made. Emotions can swing like a pendulum. Thus the choice is yours: Adjusting your attitude to better cope with seeming misery and unspeakable truths can translate to dividends which will help you, not hinder you.

The inverse is also true: The influence of a poor attitude can often result in harch criticism, cynicism, and burn-out. Although this is not to say you ought to go skipping gleefully through some gruesome crime scenes or episodes involving human decay, despairing is not going to aid you. Surely, it will not help those around you either. As the protector and guardian of all-things-safe, people will look up to you, always, and expect a certain brand of understanding and consolation. Especially during difficult moments, the public will seek refuge from the man/woman in uniform.

It may not be easy, but maintaining a relatively positive outlook on life--trials and travails included-- is far better than succumbing to negative feelings and thoughts.The brain's complexities and marvels can be a two-way street. YOU have control. You have options.

An inclination to believe that humans are purely motivated by self-interests can compel you to harbor a detachment from all things good. Notwithstanding the fact that some people are self-centered and will feverishly go to great lengths to get their way, the other side of the coin must not be forgotten. There are countless authentic humans who are steadfast givers, providers, and constructively oriented (versus destructive forces).

Ultimately, it boils down to who you opt to be as a criminal justice practitioner. I've witnessed both.

No matter how difficult it is to abstain from negative guff stemming from deplorable circumstances, it can be done. A choice to fight or submit to the despairing circumstances presented by the job is necessitated. Choose wisely. Refrain from spoilage and deny a dour disposition.

Synonymous with the aforementioned comparisons between positive and negative outlooks, you will inevitably notice the behavior of your colleagues. Again, the choice between the two modes of operation as a peace officer (personality-wise) is yours. Evidently, some emulate naysayers with whom they work on the streets or in prison facilities. Others self-dissuade. That is, they maintain focus on dealing with high-impact situations and churn out a tweaked attitude with adjustments to cater survivability.

There is no pretending this career choice comes with more happy moments than sad ones. Frankly, there is a mixture.

Innately, the tragic incidents encountered by peace officer cadets seem to far outweigh the positive moments and chapters. Why? Logically, negative forces have the potential to leave scars. These instances can be so preposterous that they deposit indelible remains upon the human psyche. The positive ones seem to be back-seated over the white-knuckled events. The graphic intensity seems to remain longer than more mild instances. Productive experiences have a similar effect, and it becomes a choice to either dwell on the negative or filter it (them) from your system.

Learned behavior, i.e, mimicking one or more colleagues, must be considered to strike a healthy balance. The suggestion is not to galvanize yourself to where you are completely unfeeling or, conversely, too emotional with respect to real-life events. You will observe human depravity. How you deal with it is key. In the event a colleague displays ill-conceived behavior, this action, in and of itself, becomes a lesson in the category of "what not to do." That is how I maintained a balance throughout all my years on duty. It is also what I taught those under my tutelage when I was a field training officer (FTO).

The human body is a marvelous construct, yet it can fall into a deficit if you do not heed warnings pertaining to stress. Ill-health ensues when we encounter day-after-day of decay stemming from episodes of societal breakdown. Being vigilant with your emotional welfare equates to a viable opportunity to keep your head above water and therefore professional efficacy.

It boils down to possessing and harnessing a positive outlook, consistently. Bad days will transpire. Yet, it is how well you deal with these dire experiences which will help your evolution as a cadet learning the ropes.

As with any occupation, conveying a professional demeanor is tantamount to success or lack thereof. Perception is a tremendous component in the criminal justice arena. How you handle incidents will be observed by not only those in leadership positions but also by the public (arrestees and inmates included). A piss-poor attitude is noted and, in effect, unwittingly deprives a cadet of a potential ally.

Demeanor is typically based on your attitude towards your role and interactions with people. As a cadet in the criminal system you are poised to effect change and hugely impact lives beyond measure. Maintaining a finite focus on the tasks before you lends well to success. And success transcends to an even healthier attitude. The cycle of life comes in myriad forms. No reason you can not be the catalyst. After all, swearing your oath was the moment you grasped the requisite tools to complete the job. That required an authentically optimistic attitude as well.

Remember, that you were carefully vetted from thousands of candidates, all of whom sought a role in the criminal justice system. You were selected for, among other things, the personality you portrayed on paper and in-person. Sustaining your persona and not allowing your attitude to be bastardized by learned behavior and/or allowing your positive mindset to wander down dark roads is your responsibility to you, your agency, your family, and the public to whom you swore an oath.

Law enforcement administrators saw value in you. Therefore, you were placed among a cadre of peace officers because of a displayed attitude which was deemed suitable for the role. Confirm the confidence others waged on your behalf. Criminal justice system supervisors and leaders hold the pen upon your "Officer Evaluations" documents. Attitude is surely one category to be addressed.

The human species is a marvelous creation equipped with natural instrumentation we still struggle to understand. The very component parts (brain-based) with which we conduct self-study denotes the vast abilities we possess as humans. Imagine a computer trying to figure out for itself why it is so amazing, or how it was able to complete a task so well- adoring its vast abilities. With this analogy, are humans any different? Therefore, properly keep in context the elements which comprise your being, the essence of which is YOU.

Don't be dissuaded from your well-founded personality (attitude). Arrested parties and convicted inmates will certainly try you time and again. Graphic encounters repeatedly arrive. It is the nature of your career choice.

You are the one charged with "handling" chapters of lives decimated by circumstances. Each episodic casualty can steal a piece of your soul. It is possible to become a casualty yourself and it is equally in your control to stave off such an occurrence. Besides being the gatekeeper of those caught violating our laws, you must also stand guard over your emotional scales with careful balancing acumen. Knowing that negative forces lurk around you is a portion of a stabilized mindset. How you promptly combat these negative forces as a cadet is a feature that will enable the most optimal attitude, from which exponential dividends will materialize.

It's your career. You are filling a hugely responsible role. How do you wish to be perceived? How important is your mental welfare to you? No need to botch it up with angst. A properly-balanced attitude is key not only as a cadet but throughout your career and lifespan.

Check-in on Your Outlook

Outlook, outlook, outlook. There is an absolute freedom emanating in our thoughts, if only we utilize the proper context (attitude) to truly enjoy the liberty we are given. Let's go forward with the following thought: "A pessimist sees only the dark side of the clouds, and mopes; a philosopher sees both sides, and shrugs; an optimist doesn't see the clouds at all — he's walking on them." ~Leonard Louis Levinson

Attitude is everything, especially illustrated when we march in cadence (life). Forge on, cadets, forge on!