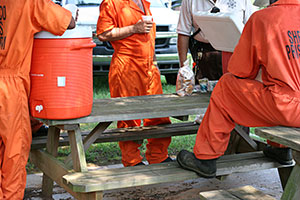 Some of the fellow corrections officers you meet in the academy or the first day on the job will be your lifelong friends. There's a strong bond among those who work in this profession. Without you there would be no place for those convicted of crimes; you're doing a public service and that comes with much deserved respect.

But let's be honest. It's a dirty job and somebody's got to do it. You're going to be searching the inside rim of the toilet bowl in an inmate's cell for contraband, have untold bodily substances thrown at you, and you're going to scrape bleeding guys with AIDS off the floor after a fight. You're going to have days when you get knocked around too.

We sat down with Tre Hardiman to learn more about staying safe in a rough environment. He was a correctional officer at the Cook County Jail in Chicago during the late 1970s and '80s.

In case you haven't heard about the Cook County Jail, it's the largest single-site jail in the nation. It used to have its own electric chair until that was outlawed. It houses some of the roughest killers in the country who are there for life with no possibility of parole. A few years before Hardiman started work the warden was forced to resign on allegations that he was beating the inmates. In 2008 a class action lawsuit was brought against the jail with allegations that included, among other things, inmates suffering rat bites while they slept, and mandatory inner-urethra swabs on males to check for STDs upon intake.

Hardiman jokes, “If you get locked up in any correctional facility it's not a holiday.” That goes double for the Cook County Jail.

Violence Comes with the Territory

The Cook County Jail is one of the roughest places around. It's a huge facility, it's in the murder capital of the nation, and it's overcrowded.

Your CO training is going to cover a lot of territory about safety and self-defense. But while you're in there you've got to be smart too. As Hardiman puts it, “there's a certain amount of danger in any police position.”

Nationally the US Department of Labor reports that in 2015, corrections officers suffered the second-highest rates (police and sheriff's officers were first) of workplace-related injuries in the nation. For every 10,000 full-time correctional officers, 420 sustained workplace injuries severe enough to warrant missing work, and that was for an average of 11 days per incident. Altogether, in 2015 16,690 correctional officers were injured on the job. Fortunately that year no COs were killed by inmates.

At the Cook County Jail in 2016, corrections officers sustained 500 attacks by inmates.

We can take a long-term look at the dangers COs face from a study published by the federal National Institute for Occupational Safety and Health. Three epidemiologists and an MPH Associate analyzed a range of statistics for the period between 1999-2008 and found the following nationwide:

He's seen what happens when new COs don't do this, “...if you don't it's a situation where you could just about lose your life...I've known a lot of officers who were injured very badly just working in the jail.”

How do inmates end up getting the better of the COs? Hardiman has a quick answer: “Taking the inmates for granted.”

If you ever thought your job being a CO was getting routine, just think if you're the inmate. His life is three times more routine than your eight-hour shift. He's got time to watch your every move and analyze your every weakness. Now multiply that single inmate by a thousand, or however many inmates you're dealing with, and you start to understand what you're up against.

By default you're going to want to get into a comfortable pattern. And the inmates are going to know your every step. Hardiman explains this in detail:

There's a reason why Hardiman mentions a fire, a riot, and even a massacre. It's because those things do happen.

In 2017 CCTV video from inside the Cook County Jail revealed scenes of several prisoners rioting. First one person threw food packaging at a television screen, while another started climbing the wall. There were no correctional officers in sight. Then several other inmates took off their uniforms and stuffed them with trash. After that they put their uniforms in a microwave and pushed the start button.

Eventually a special response team came in to restore order. Eight inmates were charged with arson, while four COs had to go to the hospital for smoke inhalation.

Shortly after the video of the arson riot surfaced, another incident made the headlines at the jail when three inmates jumped two COs. They ended up sending the two to the hospital, one with a broken eye socket bone and the other was unconscious and kept over night for observation. The three perpetrators were charged with attempted murder.

But don't think you're empty-handed to fight back and restore order.

Tools of the Trade

As a CO you've got pure authority. Inmates must do what you say or they get punished. Of course, with this authority comes the responsibility to use it legitimately. Some abuse it, but those guys are getting caught more often now that cameras are everywhere.

So what do you do when prisoners get out of hand? You don't have a firearm. Most prisons don't put firearms in the hands of COs on the floor because that puts a target on every CO's back as someone who could be jumped for a gun. The only guns are usually rifles or shotguns in towers, far away from the prisoners.

What you do carry is a radio, truncheon, handcuffs, and pepper spray. In a hand-to-hand situation, these tools are your best friends.

But the best way to win in a hand-to-hand combat situation is to avoid it altogether. You can do that with a “carrot or stick” reward system where you dole out some privileges for good behavior– things like more visitations go a long way in keeping inmates on the straight and narrow. For a lot of inmates having someone who loves them on the outside who comes to visit once or twice a month makes a night and day difference. Allowing a dad to see his daughter on a weekend can translate into a month of good behavior between each visit.

Probably the best known stick is solitary confinement in the dreaded hole.

Hardiman doesn't need to mince words when he describes it.

It's 40 square feet, no lights, no air conditioning – it's 90 degrees outside, 200 inside – your food is slipped through a hole, your toilet is a hole in the floor, and you basically have no bed – a concrete bed. It's a bad situation all the way around.

There's also new technological innovations that are making your job easier too. Cameras have proven to be a game-changer. For both the COs and the inmates.

There's always been instances where inmates falsely accuse COs of abuse. With more expanded CCTV systems everywhere it makes it easy to spot lies, as well as to monitor people in general. If you do a cell search and find some Xanax tied off in the end of a rubber glove, you can look back through your security footage to see who passed that to who and when.

And unfortunately sometimes COs are seen to be roughing up an inmate. As Hardiman says, “Now you've got the correctional officer's brutality. You've got the situation where they violate your civil rights, and all this kind of stuff. And people are now suing correctional officers and police and they're getting paid because the officer did not do his job correctly.”

And once again Hardiman is not speaking from hypotheticals. In 2016 an inmate at the Cook County Jail filed an excessive force lawsuit against the sheriff's department and the individual CO who beat him. The actual beating itself wasn't in question – that was caught plain as day on a CCTV camera. What it showed was the inmate on the ground in the fetal position, while a CO stood over him punching and kicking.

New tools like expanded and improved CCTV camera systems have a positive impact for both the inmates and COs. But innovations are never going to make the job easy.

There Will Always Be Challenges

From the time when Hardiman started in corrections, he thinks things are improving as time goes on and people try more innovative strategies to manage and rehabilitate inmates. But it's not perfect. While things like training and methods to motivate prisoners improve, other challenges arise.

Things are getting better, but it's so overcrowded. It becomes worse when you have inmates that are being housed together – sleeping together – in cots, and sharing the washrooms, showers, and it gets really tenuous among the inmates who are fighting amongst themselves, different gang members are there, robbery...

Unfortunately for society, but fortunately for you, there's always going to be people who break the law. And when they do, you'll be there to make sure justice is served. It's not a pretty job, but someone's got to do it.

Degrees for Occupational Advancement in the Corrections Field