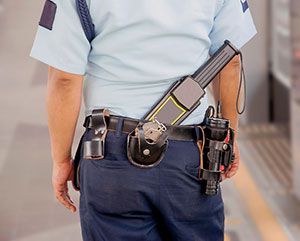 Tre Hardiman joined the Cook County Sheriff's Department as a correctional officer in the late 1970s. In the decades since he completed his training a lot of things have changed. But some things haven't.

Hardiman sat down with us to offer his insights into what training can and can't prepare you for, looking back on what he remembers from his CO training program, which back then, lasted 10 weeks. After that he was thrown into the deep end and left to sink or swim.

Correctional officers right out of training go down to the jail and they see 450 inmates that they're responsible for. They're scared to death, but you can't look scared or act scared.

Today CO training for the Cook County Jail is still 10 weeks, and afterward new COs have a long period of on-the-job training. The more OJT you get, Hardiman says, the tougher you'll get. There's a lot of things you'll learn through experience that are impossible to learn in the academy.

Serving in Chicago's Cook County Jail, Hardiman's career as a CO spanned the '70s and '80s.

To put that in context of how corrections was back then, in 1977 Cook County warden Winston Moore was forced to resign after allegations surfaced of him beating inmates. And just before Hardiman signed on, in 1978 a grand jury inquiry criticized conditions at the jail.

Overshadowing all of this was a national issue regarding CO training.

1971 witnessed the most significant prison uprising in US history, the Attica Prison Riot. That incident saw 1,000 prisoners hold 42 staff members hostage over the course of five days in Western New York State. Ultimately 43 people lost their lives in what became a wake up call for correctional facilities across the nation.

Speaking about the training of the COs at Attica, the New York Post put it like this, “The corrections officers were often locals simply looking for steady work. They received no training on how to deal with caged, often violent men and were paid so poorly that many required a second job to make ends meet, yet each was expected to oversee anywhere from 60-120 prisoners at once.”

When Hardiman applied with the sheriff's department, they told him they preferred candidates with a college education and previous experience in security or corrections work. Attica was already having an impact on CO qualification requirements just a few years later.

There hasn't been a situation as serious as Attica since, and that is thanks in large part to CO training and procedure updates. Today COs with the Cook County Sheriff's Department and across the country get trained in substance abuse issues, psychology, and mental health.

But even this improved training doesn't entirely prevent serious problems from cropping up, especially in a nationally prominent facility like the Cook County Jail:

Why Training Can't Prepare You for Everything

In some respects working as a CO is a cat and mouse game. For every search technique that's taught to find contraband, an inmate is going to find a way around it.

Training will warn you about inmates who try to “suitcase” items after visitation (a term that refers to hiding things in certain body cavities), but the inmates are scheming and testing for weaknesses 24 hours a day, and they will eventually find a way around your training.

In Hardiman's opinion COs have got to combine their theoretical book training with on-the-job experience and common sense. This combination gives COs the possibility to use their natural strengths to supplement each other when they work as a team.

Guys who go by the book following what they learned in the academy to the letter will supplement guys who rely more on instinct and common sense, and vice versa. A new CO might insist on taking a relaxed inmate to breakfast shackled because that is protocol – maybe preventing an incident – while his partner might have let the inmate walk freely to keep his mood up. A new CO will do a cell search by the book and turn up nothing. But his partner will feel like something's not right, take a second look, and find something.

What one CO misses another will make up for, and the team will be stronger for it.

Over time you'll be doing things you learned at the training academy so much that they'll become second nature, and then you'll have more time to strategize and develop the approaches that work best for you based on your own experience.

That's why Hardiman says there are two types of COs...Either you're a by-the-book guy or a by-the-experience guy.” But then he brings up another subject that your training can't prepare you for either...

CO training prepares you to meet many of the challenges you’re likely to face head-on, but the honest fact is that a certain percentage of COs won't make it in the long run. You've got to have something special to make a career out of corrections.

One of the reasons the demand nationwide for correctional officers is so high is because of the attrition rate. In Vermont this peaked in 2004 when entry-level COs faced a turnover rate of 35 percent, with temp COs turning over at a rate of 77 percent.

The Right and Wrong Way to Go About Being a CO

Spending eight hours a day in a jail comes with a lot of stress that many can't take. COs lose their cool, change their attitude, and some even join the ranks of the inmates by breaking the law while on duty. Hardiman explains that's the main reason why COs earn higher salaries than their police counterparts, “You've got to deal with inmates each and every day inside a facility you can't leave. It becomes a very tedious job.”

Everyone deals with the stress in their own way, which makes it hard for training to address stress management specifically. Sure, you will be trained in coping methods, but things get real when you find yourself snapping at your kids because you had a bad day at work. Something that will soon make you realize you need to find a way to process your stress effectively.

This is a tough period every CO goes through. Maybe it's a phase, and maybe it's more permanent. Regardless, in these situations sometimes the only thing you have to fall back on is your training.

Your academy and on-the-job training does everything it can to make you a by-the-book CO when you're first starting out. But you can have traumatic experiences that will make you instinctively place your own well being above what you've learned in the academy. “If the guy that goes by the book ever gets beat down or gets his teeth taken out of his mouth, that book is going to sooner or later go out the door.”

Hardiman ends with some practical advice for new COs...

When you graduate and you first start working at the jail, be aware, have an open mind, watch, look, and listen. And concentrate on your job. At least for the first five years because if you don't it's a situation where you could just about lose your life working in the jail house.

But many COs have a long and rewarding career in corrections too. There's a great sense of camaraderie between fellow COs. Plenty of COs also know that in their own ways they've had a positive influence on the lives of some inmates.

The Truth About Starting Salaries in Corrections

Guide to a Cadet’s First Year